With her flamboyant playing style, Svetlana Berezhnaya has made an impression around the world. At the present time, she is the director and organist with the State Philharmonic of Mineralnye Vody, in the Caucasus. The region has long formed the natural and symbolic border between Asia and Europe. Svetlana studied piano in Moscow and Kazan before studying the organ at the Brabants Conservatorium in Tilburg, the Netherlands. She is a laureate of various competitions and regularly performs throughout Russia, Europe, North America and Asia. One highlight of her extensive discography is the CD she recorded in 2013 in the famous Notre-Dame de Paris, marking the occasion of the cathedral’s 850th anniversary.

With the support of the Permanent Mission of the Russian Federation to the European Union. 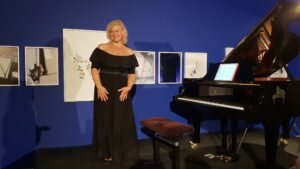